Thoughts about my kids

I'm really behind on posting and on uploading photos, so this is going to be a photo-less post temporarily (not anymore!), but I want to post what i'm thinking about my kids at the moment.

James is doing much better, thank heavens! He still fights sleep more than he used to, and he still occasionally wakes up in the night, but is usually only awake for a matter of minutes instead of hours...phew! But mostly, lately it has been really hitting me how grown up my James is getting! Just now, while I was writing this post he crawled over to the steps and started climbing! Ahh! He's not supposed to do that yet. 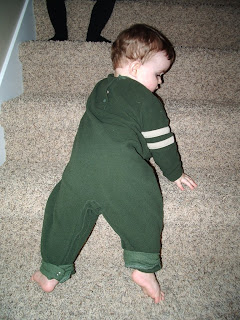 He has pulled himself up to a stand a handful of times on them, but to go from that to climbing right up them...*sigh* my baby is growing up too fast! He also has pretty much decided that baby food is a thing of the past and real food is the way to go. He can eat an entire banana in one sitting and quite enjoys it, especially if he can get his hands in there and make a nice mess in the process. He has also discovered the pure joy of macaroni and cheese. 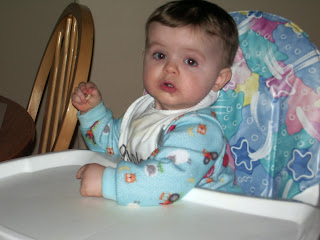 I'm a little sad about this, not because I will miss buying baby food, but because I'm not very good at coming up with nutritious things that kids will eat, as I've mentioned before, so I'm afraid he won't get nearly as nutritious of a diet as he has been getting, but I'll do my best. He is such a sweet little kid though. He is getting quite the personality. Its just somehow so sad to see him growing up. I'm one of those people that really enjoys having a little baby that depends on me, as long as they give me enough sleep of course :), and wants to snuggle me, at least at bottle time, and now he's getting so big that I know those days are dwindling fast! I mean, Beth still needs me, and still needs to snuggle with me sometimes, but you all know what I mean...its just not quite the same when they grow out of that baby stage. So, hopefully he will forgive me if I cling to his "babyness" a little bit longer.

Beth has been VERY two lately. Time-out does not seem to be doing the trick lately either, but we're trying to be consistent (trying being the key word, we pretty much stink at this discipline thing). I think part of it is boredom though. If I keep her occupied enough things seem to go a lot better, the problem is I'm no good at it. So if anyone wants a play date!...but anyway...Right now Beth is playing with her cousins Jarom and Jordan. They are having a blast! They have all been playing together so well. Beth just follows them around like puppy dogs. She loves to play with older kids. She has a fantastic imagination, but not enough experience to really come up with ideas on her own, so if an older kid comes up with a game to play, she is so into it. She can pretend with the best of them. I can't tell you how many hours our laundry basket has spent as a boat or a car or even a turtle shell. I love when she gets to play and gets more and more ideas to feed that mind of hers. I hope she stays that creative. I don't think I'm an extremely creative person and I always wished I was more so. I get a real kick out of watching her. 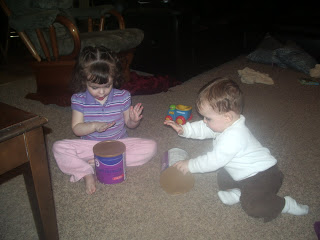 So, those are my kids, and my thoughts at the moment. Hope you don't mind reading all my random thoughts.
Posted by Diane Owen at 1:09 PM

i wasn't a very nice kid but i remember getting so mad at you when we played barbies together because you would interact with them as their mom or whatever and we weren't supposed to be involved with them (in my mind) we were just helping them move, giving them voices....anyway i think you were 2 or 3 and i was 3 or 4...weird memory. anyway, isaac does that too with the laundry basket! i used to push him around in it but now that he's 40 pounds i don't so much...

I was always way more into being mommy than playing with barbies the "right" way. You were not the last friend to get mad at me about that...I guess I was just born to be a mommy, too bad i'm not that good at it yet!!

Those thoughts are so sweet! You are a wonderful mother, and don't believe otherwise! Miss you!

You are such a cute mommy. I love that you notice and reflect on all the fun, cute, and amazing accomplishments your darling children have. You are a great example to us other mom's.