Monday afternoon around 3:30, Ryan called me to say that he had been offered some tickets to that night's Jazz game. I thought it sounded like fun, something different that we don't usually get to do, so I frantically started calling around for babysitters. Luckily our good friends Jenny and Asiel were willing to help out and we had a great evening! The tickets were amazing! Apparently some company that works with Move Networks gives these V.I.P. tickets as a perk every now and then and somehow it was Ryan's turn to get them. We went with another guy from Ryan's office and his wife. They were a really nice couple, we had a lot of fun. We were on the 4th row, mid-court. We are talking padded seats here people! Not only were they amazing seats (the tickets said $425.00), but they came with a parking pass, very important down town these days, a gourmet dinner at the ESO, and half-time snacks. This was the life! I don't think I can ever go to a Jazz game as a regular person again! It was a great game too. The Jazz won 110-88 against the Hornets. They hit a whole bunch of 3-pointers and we were like 10 feet away! The players were huge, the court looked tiny, and the basket looked really low from our vantage point! We took a few picture, but only from Ryan's camera phone since I forgot the real camera *doh*, he said he would upload the picture for me, so I will add them later. I wish I would have had the camera to take a picture of me standing on the court covered in confetti as I was at the end of the game! So fun! And the best part of this really fun evening was that it didn't cost us one cent! I love dates like that! Thank Asiel and Jenny for watching the kids! They were only going to watch them for the evening but they were sound asleep when we went to pick them up so they just stayed over night. They slept all night again. Beth even slept all night without her binky, I was so proud! 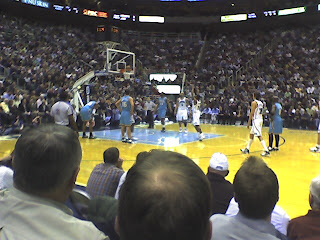 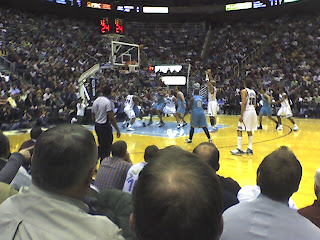 holy cow, a whole date and then NIGHT without kids? I can only imagine. sounds soo fun and amazing!! can't wait to see pictures!