James had his Doctor's appointment on Friday, shots and all. He was very brave and showed off for the doctor.

That puts him in the 58th, 86th, and 98th percentiles respectively. His growth has slowed considerably, thank heavens, but he is still tall, and that head of his just keeps getting bigger, but he is so dang smart it has to fit somewhere!

His vocabulary as of now (in order of most used):
Dada
whastha? (What's that?)
Oooooooohhhh
whostha? (Who is that?)
Hi
Mama
No no
Ball

He can also repeat lots of stuff to you, but those are his favorite and most oft repeated words. His doctor was very impressed that he had that many in his repertoire already.

He is also making some good strides toward walking. He has taken 2-3 steps at a time on many occasions now, often without prompting. He also stands on his own all the time now with great balance. He can even stand, bend down and stand back up without falling. He gets a HUGE smile on his face when he takes steps. He is so proud of himself for being so big. It won't be long now before he's running...i'm not ready, i'm not ready, I'M NOT READY!!!! Speaking of I'm not ready, he also seems to be trying to move to 1 nap, its been 2 days so far of only one nap. I hate this transition. He still needs two. I still need two. But oh well, we'll get used to it if he insists on keeping this up.

Anyway, here are a couple of shots from birthday celebrations. As you can see, he thoroughly enjoyed his cake, or the frosting at least... 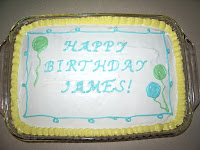 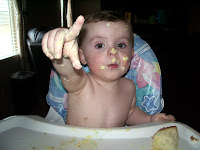 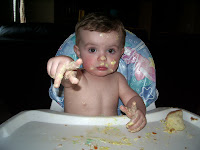 wow, did you make that cake? so pretty and professional! i can't believe he's one. sure is cute though! my kids have pin heads, always in the 10th percentile, yet i still can't find shirts that go over their heads easily. you must have a REALLY tough time.

Diane, thank you for the pictures. He looks so cute...of course that is because he is. Love you all.

That is a great cake. James looks so cute enjoying his frosting. He is a smart little kid. He is so cute, Jacqueline keeps talking about "baby James". He makes quite the impressions.

OOOHHH So cute and big! Did you save me some cake?

Happy B-day! Sorry we couldn't be there :( Looks like San Fran was fun. I love Pier 39 and Ghirad. square (I don't know if you knew I used to live an hour from there)Way to stay positive through hard times! Too bad we couldn't go too. It has been too long since we had a BIG Owen family vacation (yosemite was b4 you were in the family) but I guess for understandable reasons--maybe we could plan one sometime soon!
love angie