So James has been in the wonderful transition period between two naps a day and one nap a day. When Beth got to this period I remember it taking some adjustment and it took a couple of weeks to settle into our new schedule, but it worked out fairly smoothly. So far with James it has been a bit of a battle. If I let him take a nap in the morning (or force him down for one, which I have been known to do on some days) he ends up refusing to take an afternoon nap thus making the second half of the day fairly miserable. If I make him wait until afternoon I have to be prepared for a bit of a fight all morning with a whinny tired baby. He still needs two naps, but he just won't take them any more! With all of this combined with his new walking skill, he's been pretty cranky and tired the last few days. Yesterday Ryan was working from home and while I out taking Beth to the doctor (yes, we have illness in the house, AGAIN) he heard James playing in the hall and then all got quiet, and when he went to check on him, this is what he found. 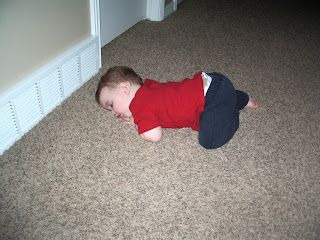 Obviously, the poor kid is tired! He did the same thing this morning, just passed out in the middle of the room. Something he has never done in his whole life until now. Kids are so silly! Why won't they just admit they are tired and take a nap? Both of these mid-morning naps ended up being a little too early and making for a bit of a afternoon battle. Today I managed to finagle another nap but only after a battle for my sanity. Silly boy. Good thing he's so dang cute.
Posted by Diane Owen at 7:36 PM

sleeping battles are the worst. it makes me tired to think about it!

What is not fair is that my son started this about 2 weeks ago. He is much too young. Some days we get one long nap (3 hours). Some days 2 or today one normal one way too short, with a grumpy baby til bedtime. I for one need 2 regularly spaced naps.

LOVE that picture. So cute!!