So I finished the triathlon. That was my goal. I jogged across the finish line on my own legs, didn't have to be dragged or carried. So I achieved my goal. Unfortunately I finished in last place. So that's a little bit of a downer to the self-esteem, but hey. I finished 18th place in the women's swim (out of 94), so that was good! 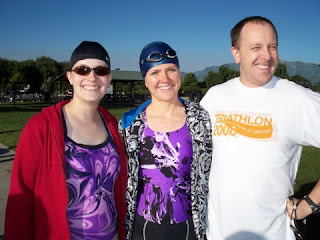 I didn't sleep well the night before, but the adrenaline was working for me before the race when I was preparing and hanging out with my cool cousins Delos and Misty, Anthony participated too but he always leaves us all in the dust :). The swim went well. I didn't feel at the top of my game, but I passed a few people, survived a couple of good smacks to the head by other swimmers, had to stop for a few seconds to recover from the wave of water I swollowed, but I cut a minute off of my time from last year and finished in 10:34.9. (ignore the bad swimsuit picture) 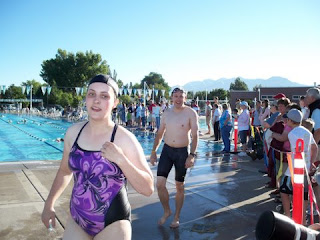 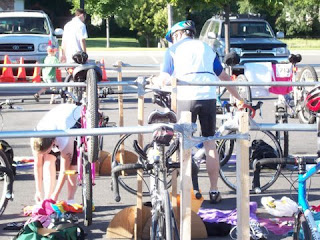 My transition to the bike was a little slow because I was nervous, tired, and flustered but 4:30 later I was off on the bike ride. There I was, clipping along at a good speed, or so I thought, and then every biker in the race started passing me like I was standing still. I couldn't figure out what was going on. They were flying past me like crazy. People I knew were way behind me in the swim. What was I doing wrong?? Then I realized my problem. My bike. I had made the decision not to ride a road bike because I am not familiar with them and I thought I would be uncomfortable on one, so I brought my own bike, but I did not even think about how heavy my bike is and what a difference that would make. But apparently its a HUGE difference! So I got passed like crazy and it took me 1:06:08.7 to finish the 12.5 mile bike course. I really thought I was going to die the last mile or two. I past a girl going the other way that told me I was almost there so I picked up speed and it turned out I had over 3 miles left, so I totally ran out of energy by the last mile and a half or so. I was actually looking forward to the run so I could get off that infernal bike seat before my butt completely fell off.

Once I finally got back in, I hung up my bike, grabbed a handful of candy to get my sugar back up, traded my helmet for a hat and 1:31 later headed out on the 5k. I knew there would not be much running going on, my knees were aching, but I was okay with that. I sort of sped walked the whole way, with an occasional jog here and there. Most of the way was a really lovely shady path along the river and I just enjoyed the view and the music pumping through my ipod. I jogged across the finish line (46:00.2 for the run) to a total finish time of 2:08:45.6. Highly pathetic. But I finished. I did two solid hours of exercise and it was good for me. I knew all along I would not be winning anything, I was just kind of hoping I wouldn't be last place...oh well. Better luck next time. At least with the pursuit style of the triathlon I wasn't actually the last one to cross the finish line, so it didn't look like I was last place, but I really was, except for those who didn't finish. At least I finished. 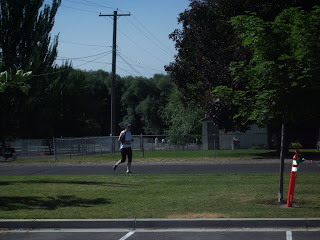 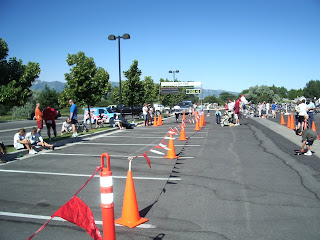 (That is me crossing the finish line, I know its hard to see, but I'm there) 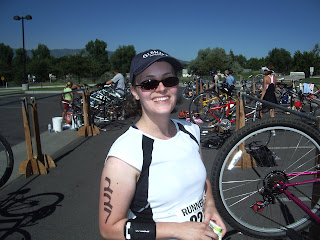 HOORAY!! I am so proud of you!! And despite your disappointment you really have inspired me by doing this. Someday I will join you! he he....

Congratulations! You look great by the way.

Who cares what place you came in...you did it! Lots of people never do something like this!!!

I'm proud of you!

Congratulations Diane! I'm so proud of you! I told you about that bike though...it sounds like it's no big deal but doing it is AWFUL. I'm so glad you finished! My goal last year was to not be last too, and I made it...but I was second to last (and the only one behind me was your 70-year-old mom...). I'm so impressed!

You made me cry!!! I SOOOOOOOOO would have quit long before. Even if you took last, the fact that you finished is absolutely amazing. Good for you, Diane!!!

Way to go. I would have been one of the ones who didn't even finish. Oh way, I never would have started.

I am so jealous that you did a triathlon...I think that is amazing! My sister, brother, and dad are doing one this weekend. It is something I have always wanted to do but I have never done it...so props to you for sure. Anyway, we should talk soon! And I love your new hair cut! I got my hair cut and it was not nearly as much of a positive experience:)

Good job, Diane! I'm so proud of you! For me just doing that would be so great. I'm actually training for a half-marathon in October. I don't really know how I'll do, but just having something to motivate me and push for makes a big difference. I like your kids pictures, and your new haircut. I have been a blog slacker lately and haven't checked your blog for a while.