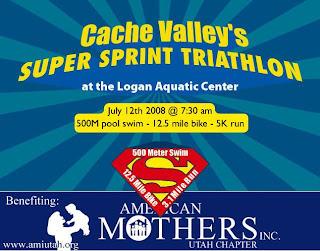 As many of you know my family has this wonderful tradition of participating in a triathlon every year. A bunch of my cousins and aunts and uncles get together to cheer each other on. The number of participants vary from year to year, but its always a good time. The night before the tri we have a big pasta dinner to carb load for the event, and then after the triathlon we have a little party where we give out our own awards and award the "Larson Cup" to the winners of the men's and women's divisions within our family. Its great, that way we don't feel like we have to compete against the whole field at the tri, just our own little family.

The last two years I have participated as part of a relay team. I felt really good about that, but I've always felt that I should try and do the whole thing. Last year James was only like 3 months old, so I had a good excuse. But this year, after my 30 lb. weight loss and no baby to blame, I had to excuses, plus the triathlon we always do wasn't allowing teams this year, so I'm signed up to do the whole thing in less than two weeks. I'm a little terrified! I have actually been training. Only for the past few weeks, but its better than I would have expected of myself. I am feeling really good about my swim (that's the part I've done the last two years), its not perfect, but I think its improved from last year, I've done a little biking and I think I can survive that part. I definitely have a little more work to do there too, but I will survive. But the run...good heavens the run...the last two days I have focused my workouts on the run, sometimes combined with swimming, but trying to run, really run on a track or outside. Right now as I sit here and type it is a good thing it only requires the movement of my fingers because the rest of my body refuses to budge. OUCH! The past few weeks I've been training on my elliptical thinking, "it works the same muscles, right?" WRONG! I've known all along that I am not a runner. By no means have I ever been a runner, but good heavens! I may have to walk the whole 3 miles, I will try and jog as much as I can, but in reality my guess is it will mostly be walking, and I am okay with that. As long as I cross that finish line I will feel good about it. It is my first triathlon and I'm not in fantastic shape, so my goals can't be too lofty! So here is to progress and to hoping my muscles unlock to I can train a little more over the next 12 days. WISH ME LUCK!
Posted by Diane Owen at 3:13 PM

wow! how awesome! i've always wanted to participate in a triathalon! What did you do to lose 30 lbs?

Go Diane! I know that terrified feeling! I wish I were going to be there...I'm so sad about that. You will be so proud of yourself for finishing! It is an awesome feeling (once you get over the nausea. LOL)

you're awesome, you can totally do it. for me, the worst part last year was the bike. i can't swim, so i didn't expect great things from that, and i'm not a great runner, but i did expect the bike to be easier than it was. i think my problem was my bike was waaaay too big for me so i had to lean way over, and by the time i had finished all 12 miles both arms were asleep and my back ACHED (and i walked most of the run, so don't worry about that!). good luck! i'll be in abq so i won't be there to cheer you on, but you'll be awesome.

Good for you Diane!! You'll do great!!