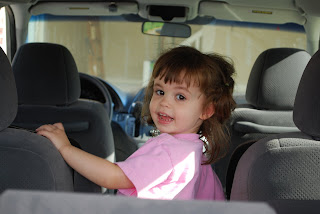 I finally sucked it up and did it. Last week Beth's binky said goodbye! I've been so afraid to do it because Beth is such a wonderful sleeper that I didn't want to do anything to mess that up. But, her 3rd birthday is just around the corner, and I knew we had to get rid of it once and for all. She has only had it at night for the last year, and she has slept without it a few times, so I figured she was ready. I made a deal with her that she should give it to a baby that needs it since she is a big girl now, and then she could go to the store and pick out a special toy as her prize for being so big. She decided to give it to my friend's newborn, baby Kyanna. So we drove over, she handed the binky over and off we went to Target to buy her toy. She picked out a little Dora doll, no surprise there. The first nap time was dicey, but since then she's really been doing quite well! I'm really impressed. She's woken up a little earlier than usual a couple of times, but for the most part she is sleeping great and going to bed without much of a fuss. Hallelujah!!

On another note, we are finally having a tiny bit of success on the potty training front as well. After months of dry runs we've finally had 2 successful trips to the potty. Hooray! Let's hope the big girl trends keep up!
Posted by Diane Owen at 8:04 AM

So exciting, yet so sad that they grow so fast!

I'm better at keeping up on blogs than facebook, so I was glad to see that you have one. Your kids are soooo adorable! My 2 1/2 yr old daughter needs to say bye bye to her pacifier too... I hope she does as well as Beth did.

Wow! Those are some serious milestones!! Way to go all of you!