James wants to be just like his daddy. I mean, really... He's always liked to follow him around like a shadow, but now he does anything he can think of to act like daddy too. He stretches and yawns loudly like him, he carries around his electric razor rubbing it on his face, he wants to wear a tie to church to be like him, he wore his belt around the other day, and of course, he loves to get his tools out and fix things! Ever since we began work on our basement, James has been utterly fascinated with tools. We got him a tool set for Christmas and he's always fixing something, its so cute. Here are a few pictures as example. Ryan had been measuring our bedroom for our bedroom set and James just had to get in on that action. 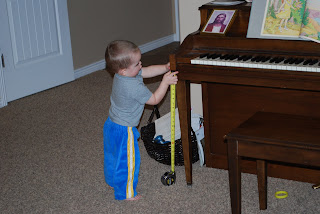 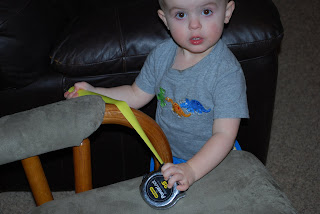 Oh my heck I just LOVE that little guy! So cute and sweet.