Out of the mouth of babes...

Beth likes to talk. And as all 3-year-olds she doesn't really process what she is going to say before she says it, and sometimes its a little embarrassing...Here's an example I've been meaning to post for ages, its too priceless to forget.

A week or two before Christmas we had the annual Owen family Christmas party. We were talking about it beforehand and I told Beth that her Great-Grandma would be there. Because we had been discussing her Great-Grandma Beth a lot lately, because she is the one who made all of our Christmas ornaments and stuff, and Beth is fascinated in her name sake, she asked if it was Great-Grandma Beth who would be attending the party. I had to explain to her that Great-Grandma Beth died a while ago and is with Jesus in heaven, and it would be her other Great-Grandma, Grandma Delsa. I knew she didn't fully understand, but I thought she grasped the concept at least. Well, the day of the party we were there a little early helping set up and in they wheel Great-Grandma. Beth saw her, and in her loud voice (wait, does she have any other?) She says "There's Great-Grandma! She's not died!!" Everyone around her just about lost it laughing so hard. I was so embarrassed and was praying that Grandma didn't hear her. It made it sound like I'd told her she had died or would at any minute. Sheesh. Great-Grandma Delsa is alive and well, thank you very much. 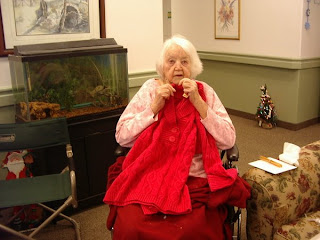 ROTFL!!! She is hilarious.

HAHAHA.... Oh my goodness that made me laugh soooo hard. What a funny girl. P.s. thanks for the GNO last night - it was fabulous!!!