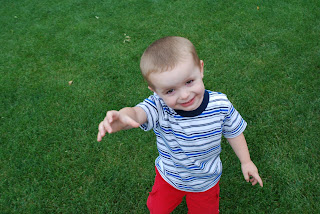 James just seems to be growing and maturing by leaps and bounds lately. I'm a little sad because I've help on to his babyness a little harder since I could, but at the same time I am so proud of my big boy!

We moved Beth's old toddler bed into James room several weeks ago when we set up her new bed, and he slept one nap in it and then hadn't shown much interest since then, but I didn't want to push him, I just kept asking which bed he wanted. Three night ago he picked the "big boy bed" and did pretty well. It took him a while to go to sleep and he woke up pretty early and was a little disoriented, but for the most part did well. The next night was better and he even took a great nap in his bed yesterday, and then last night it was the "big boy bed" again and it was fabulous! I heard him awake and went to get him this morning and he was laying in bed and said "I'm sleeping again mom" so I left the room and he stayed there for a while waking up and then came out when he was ready. I can't believe how big he is.

He also has asked me a few times if he can try going potty. We are definitely not in full potty training mode yet, but he's getting interested and I'm trying to promote that idea.

And, for those of you who know him, you know he is a talker! He talks up a storm, long sentences and all, and his imagination surprises me on a regular basis. He pays attention to everything we do and loves to be a big helper.

As the news of the new baby seems to be dawning on him, he likes to pretend he's a baby now and then, but mostly he talks about baby names and about when the doctor takes the baby out so he can finally hold it. Sweet kid.
Posted by Diane Owen at 8:41 AM

I think I wanted my others to grow up so fast, but Cheyenne still seems like such a baby to me. My other kids were already in big kid beds months ago, but Cheyenne is nice and in my control in a crib still:) I brought out another potty for her, and she loves to sit on it, pretend she is doing something and then pee on the floor:) I think that is good enough progress for now:)

That's awesome Di. Just so you know, boys aren't as bad as people say! Caleb is fully potty trained at home now, and we're just working on out and about. Then it will be working on nights...but really, we started full blown the end of May, and he's in underwear and clothes at home with no accidents hardly. :)