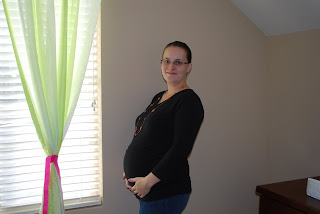 I'm 24 weeks now, woohoo! I always seem to celebrate this mile marker because, even though I have no history of problems, I have a nephew who was born at 24 weeks and lived to tell the tale, so it feels like a great place to be.

I had my glucose test yesterday and I am anxiously awaiting the results. I failed the one hour test with James, so its very possible I could again. Especially since I was diagnosed with an insulin issue after James was born, so I'm trying to gear up for the three hour test in case it comes to that again. Ugh, I hate that test! Let's just hope that if it comes to that I can at least pass the three hour test again. My risk for gestational diabetes is a lot higher with my condition, so it makes me nervous, but so far, no news.

All went well at my appointment. I had my belly measured for the first time this pregnancy, and shock of all, I'm measuring big. I always do. I would be shocked if I didn't.

We've made progress on the baby name front. We have a name that the whole family seems to agree on, except I just can't seem to say "this is it" just yet. Its so funny, I'm the one who was pushing to pick a name so hard and now i'm the one who can't commit. Weirdo. I really like the name, I do, but I'm kind of holding out hope that Ryan will change his feelings on one of my other favorite names, but so far he isn't convinced.

In other news, Ryan is undergoing some major job changes. He resigned from his current position on Wednesday. He is going into business with a few friends. The company is new and tiny, but so far thriving, so we have our fingers crossed that all will go well. Ryan is thrilled to have something new to look forward to, and I am thrilled that he will be working from home! It is going to be a tough first few months money wise, so if I'm a little on edge, blame it on being pregnant and dealing with a scary new job! But, hopefully before long the risk will pay off. Our insurance will be changing because of all of this, of course, and I figured out the major change won't happen until about a week before the baby is scheduled to be born, so I mentioned this to my doctor and he said he may be able to deliver me earlier to avoid that annoying transition at the end. Score! One great thing about having c-sections and big babies, we can do stuff like this. We will keep you posted on that. 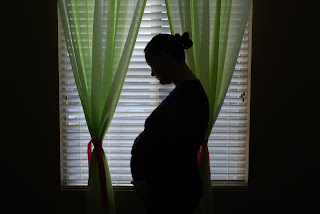 Lots of changes, so exciting!

I am just the opposite as I approach 24 weeks. That is when my sister delivered my nephew stillborn, and I can't keep thinking about me being at the same stage where it was all going well for her too. I know the chances are very rare it could happen to both of us, but it makes me feel very aware and a little anxious. Good luck with all of the changes--being pregnant is enough to make me on edge lately, job changes around this time of year would be too much. MOving twice wasn't that helpful either:) I swear my belly doubled since last week. No one is wondering if I am expecting anymore, they just come right out and ask me when i am due now..apparently it is obvious:)

Fun pictures, and nursery, I am excited to start ours!