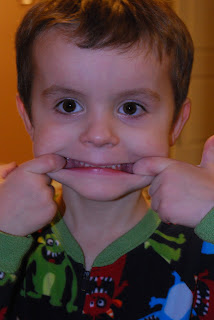 Sunday was James 4th birthday! I totally meant to do a blog about him then, but life got away from me. So, better late than never!

My 4 favorite things about James:

-He's all boy! He's cars, and trucks, and rough and tumble and its great fun!
-He is SILLY! He makes up his own words and games and its a crazy imagination he's got!
-He never stops moving. He is running, jumping or hopping around all the time!
-He loves his sisters like crazy, although sometimes he likes to show it with lots of teasing and wrestling!

Facts about James:
-He weighs 36 pounds
-He is 41 inches tall
-He sleeps about 12 hours a night and still takes a nap a few times a week.
-He would eat cereal for every meal and every snack if I let him.
-He is STILL not fully potty trained. Although I think we finally had a breakthrough this weekend. I hope, I hope, I hope...

For his birthday celebrations I let him pick dinner Saturday and meals during the day Sunday. Here's the rundown:

We had a family party Sunday night, then he had his first ever friend party Monday morning and then another family party Monday night. Lots of fun! He did not want me to make him a fancy cake this year. He wanted "chocolate donuts that look like tires". Easy for mama, that's for sure! Here are some pictures from his friend party, we kept it small because he is not a crowds kind of kid!

We raced these cars down the driveway.

The boys made their own license plates. Forgot to get pictures of the completed ones though...

All the boys eating lunch.

My gourmet and his choice for lunch. pb&j in the shape of cars, cheetos, 7up and chocolate donuts!

Happy Birthday to my boy! We love you so much and our family would not be nearly as much fun without you!
Posted by Diane Owen at 10:33 AM

I love that car idea party! I will have to encourage one of the boys to do it one year. Aj has been into sea creatures and dinos sicne he was 2 and it is a repeat every year:)