It all started Saturday morning. Kate woke up, cheerful and normal. We packed up the kids to head up to Park City to meet up with our awesome neighbors, the Ericson's, who had invited us up to their cabin for the weekend. Kate fell asleep on the drive and all seemed well. When she woke up she starting coughing a little bit, something that is pretty normal for her since her case of RSV in the Spring. It seemed to get worse through lunch and the drive to the cabin, but I wasn't very concerned yet. Once we got there, she was playing and cheerful, if a little tired and wheezy. We gave her a puff of her inhaler we've had since RSV as a precaution and went about our day. She got wheezier and wheezier as the afternoon went on, so we used her inhaler again and put her down for a nap. By the time she woke up, her breathing was extremely labored. She was breathing super fast, she wouldn't eat or drink and she sounded horrible. I knew at that point she needed a breathing treatment (I'm an asthmatic, for those of you who don't know, so I felt like I knew exactly what was going on with her). So Ryan and Michael put her in the car to head to the Heber hospital, a good 30 minutes away. Of course this had to happen the ONE day this year we didn't sleep at home. By the time they got there she was hysterical and extremely labored. Her oxygen saturation was in the low 60's and her respiration rate was around 75. Both of those are horrible! They gave her 2 breathing treatments, which helped the wheezing a bit, but she was still working super hard. The Heber hospital decided they were not equipped to handle a possible respiratory arrest, which they felt could be eminent with her current situation, and decided she had to be life-flighted to Primary Children's Medical Center. 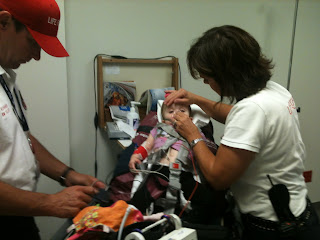 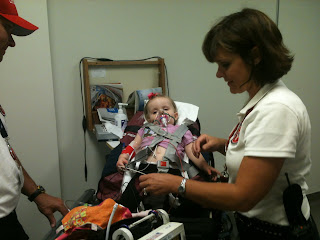 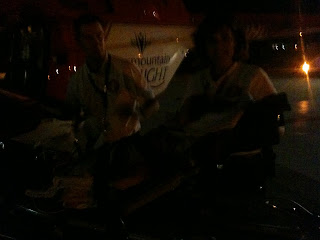 Ryan called me and told me the situation. We were both totally freaked out, of course, and we didn't know what to do. I was at the cabin 30 minutes away, and we didn't want to leave her alone, so Michael drove back to get me, then drove his car back to the hospital again so I could follow him, since it was the middle of the night at this point and I had no idea where I was going. I had thrown the sleeping kids and all our stuff in the van as quickly as possible. By the time I got there, life flight had left with Kate and she was already at Primary's. I was very distraught that she was alone, struggling to breath about an hour away from me. It was an awful feeling. We drove as quickly as we could to get there and Ryan dropped me off and went home to put the big kids to bed.

I ran in and found her in the ER, and this is what I found, well, minus the sleeping. Just about the saddest sight I have ever seen. 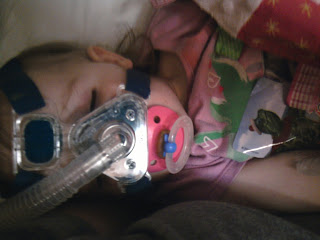 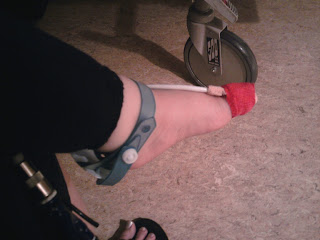 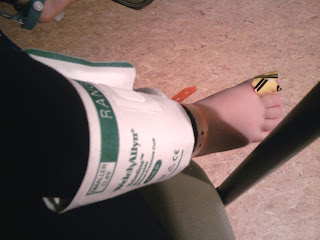 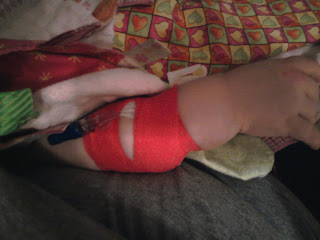 She was on a CPAP machine, delivering pressurized oxygen to her lungs to expand them. They said she got there just in time to avoid intubation. She HATED that contraption on her head, but it started to help calm down her breathing. She also had a pulse oximeter, a three different leads monitoring her heart and breathing, and an IV for fluids and antibiotics. We were in the ER for an hour or so more while they watched her and got all of her levels just right then she was moved to the PICU. 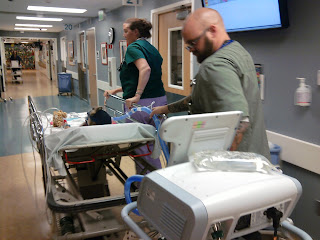 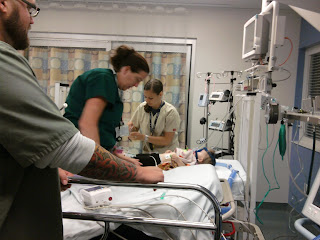 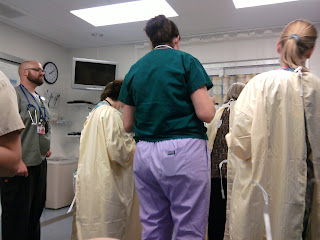 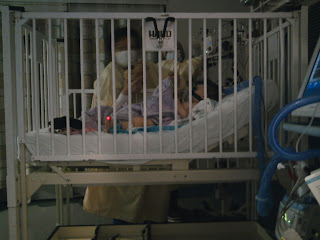 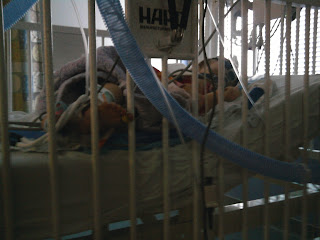 Our time in the PICU was spent fighting the CPAP, rocking, untangling chords and wires, and attempting to get sleep. Notice I say attempting. The first night I slept about 30 minutes, and the second night, maybe 4 hours if I give a conservative guess. We spent Saturday night, Sunday and Monday morning in the PICU, I traded off with Ryan back and forth the whole time. They had to turn her up to BiPAP at one point, and then slowly weaned her oxygen needs down until the could put her on High Flow oxygen, through a nasal canula, but still pressurized, then finally to regular oxygen through a canula. She also got a breathing treatment every 2-4 hours, plus other vitals checks and lots of stethoscopes to her lungs, and 3 chest x-rays. It was insanity. And, she wasn't able to eat until Sunday night, when she finally got to have a popsicle. That was the first smile we saw in 24 hours! Once she was stable on regular oxygen, they were able to move her out of PICU to a regular room. That happened Monday morning. We were relieved to get her our of the ICU, but things were difficult in the regular room because Kate was feeling a bunch better and did not understand why she was still completely tethered within a 2 foot radius. She was very grumpy and restless. 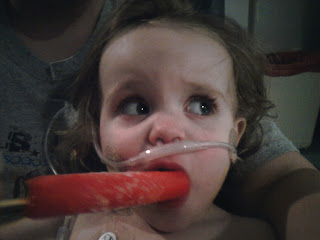 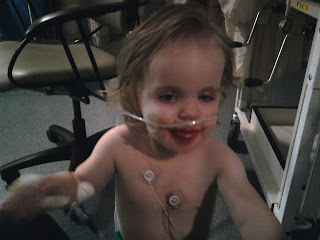 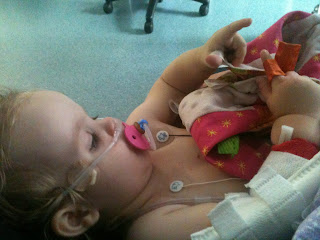 Finally this morning (Tuesday) they let her off of all of her chords and she was able to roam around in the room. That helped cheer her up a little, we finally got to see a peak at our happy child again, but it was still a battle until we were discharged around 3 in the afternoon. She came home on a preventative asthma medication, an asthma inhaler, an antibiotic and a steroid. She was thrilled to leave the hospital but has had a very difficult evening. Probably because she is soooooo tired!

The official diagnosis was Acute Asthma exacerbated by an upper and lower respitory infection of pneumonia and bronchiolitis. So basically she was coming down with a lung infection and it triggered a massive asthma attack. Poor thing really did get my genes. :(

Basically it was the worst weekend of my life thus far. It was terrifying, emotional, exhausting and overwhelming. Luckily I have the best friends and family in the world that helped out so much, and continue to do so. I couldn't have done it otherwise. It is not over, it will take a long while to get her back to 100% and back on schedule, but we are on our way. I feel totally drained in every way, and still break down occasionally just thinking about it. Let's hope all goes well from here on out. And if I'm useless for a week or two, please forgive me. :)

Diane, that post made me cry. I'm still crying. I can't imagine how scary that must have been, for you AND for her. Imagining that little girl (or my Zoe, or any other one year old) alone on a helicopter unable to breathe, gosh, it just breaks my heart for her. That must have been an awful awful thing. Thank goodness you have experience with asthma so you knew what to do for her at least. Why wasn't Ryan allowed to go with her? I'm guessing not enough room on the helicopter? So glad you are close to Primary Childrens so you could get there (relatively) quickly and be there with her. Gosh that must have been awful. So glad she's okay, I'll continue to keep you all in my prayers.

I'm so relieved she's doing better and home safe and sound! Those pictures made me want to just pick her up and love and hug on her! The kids were so sad we didn't end up with Beth and James the other day, so we'll have to plan another day for them to play. Love you!

Oh Diane I am so sorry! That is awful!!!!!! Asthma is so scary in and of its self, Bryan has it and I pray none of our kids get it! I am so glad you have her home and in your loving mommy arms!

What an awful experience! How do you prepare for something like that to happen. I didn't realize that kids that little even had asthms. All of my kids but the 4th have had RSV and they told me to expect weaknesses as they get older but we have been lucky that they haven't had any signs of breathing difficulties. Isn't it crappy when our genes affect our kids and there isn't much we can do about it:( Hope you guys can get back on track:)

I am so sorry!! That is a terrifying experience. :( I'm so glad she's ok. Wish I lived closer so I could help.

my heart aches for you. my 9 year old has been battling severe asthma for 7 years, RSV induced as well. We were sent to National Jewish Health in Denver, CO (#1 respiratory hospital in the US) from our home (Albuquerque) because our docs had exhausted everything with her. Turns out she has really bad reflux and, as we know, many environmental allergies. I know for me, and I would guess for you as well, you would do anything to trade places with your sick child. I don't have asthma, she got it from her paternal genes, so I have idea how it feels but I know what it is to spend countless nights every year checking oxygen sats, resp. rates, breath sounds, and neb treatments. I am so sorry. I hope she responds to preventative meds and you get a really good pulmonologist for her. Emily emailed me about you, we went to HS together, and it breaks my heart that you are going through this :( Alorah failed pulmicort, flovent, advair, and she is now on symbicort and qvar as well as 3 allergy meds/day. We added prilosec and things have been much more stable since...not neb free but she has been steroid free since June, after 5 steroid bursts this year alone and a hospitalization in November. I'm so glad your little one is okay. I highly recommend NJH, if you ever feel that she needs further testing they are amazingly thorough. (((HUGS))) From one asthma mom to another I truly ache for your wee one and you as well.

That's crazy....is there any thing you need? Glad it turned out ok in the end. Seriously do you need anything?