Having a Diabetic Stinks

Like the title? Its true. For the most part we are doing well with it. We have gotten the routine down, it's still hectic, but we know what to do. I'm getting better at counting carbs, or at least estimating fairly well, but it still stinks. James has had a hard few days. He's frustrated and done with shots and finger pokes. Who wouldn't be? He was supposed to get started on his insulin pump this week but it got pushed back, and he's made about that. I'm having to drive to his preschool 3 days a week to test him and give him a shot for snack. I hate it. But, luckily for the most part his numbers have been pretty good, so it hasn't been too stressful. He always has a weird number here and there throughout the day, but we are getting better at handling it. Then tonight he got really whinny right after dinner, which generally would not be a time I would worry about his numbers, unless I was majorly guessing on the carb value or something, which I didn't think was the case tonight. He was high before dinner so I thought maybe he was just still high. We sent him to his room because of his attitude, I had the thought that maybe I should check him, so we called him down a couple minutes later, and he didn't come. I went to check on him and he was fast asleep. At 6 o'clock at night. That's when I got nervous! Ryan came up with his meter and we tested him, he was down to 40! (not good, by the way). So after struggling to wake him up we got some jelly beans in him and he started to normalize. Sheesh. Stressful. Good thing he's so cute. Let's hope he's stable now and the rest of the night goes fine. 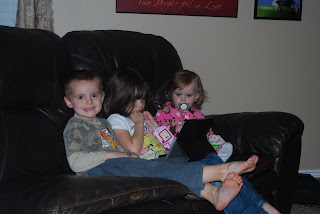 I hate diabetes.
Posted by Diane Owen at 7:19 PM

Oh Diane, I am so sorry! You are a brave Mom with a brave little boy, I know you guys can do it! Please have James come play anytime!! I'm not great at calling people to come play, so call me and hopefully we are available...we haven't been the last couple times you've tried...sorry!!

right after James was diagnosed I sent you an email of a friend who has a 2 year old with diabetes. Not sure if you got it, but one thing that she does is toe pokes instead of finger pokes. It's something he prefers and has control over, and it might be nice to give his fingers a break? Just a thought. :) so sorry you had a hard night, and glad you listened to the prompting. Diabetes DOES stink.

That is awful. I think I would have jsut thought he was tired and let him sleep. Of course if it was my kid I would probably be on edge and checking him all of the time:( Hoepfully that pump comes soon!

Diane, I forgot I had a link to your blog and just stumbled on it today. I'm so sorry to hear that your son is diabetic. Our daughter was diagnosed in her 30's a few years ago and by several flukes (I don't believe in coincidences, by the way) she became involved with a diabetes group that has older diabetics mentoring younger ones to help them in all areas of their life. I can't remember the name right now, but I'll get the information for you. It was a big help to her to be part of that community. You're right, it does stink to have diabetes, but it is managable, especially with the larger community to help. I'll get back with you. I just remembered that she had her blog address on her Christmas letter. She tells all about her journey and the group in there if you want to check it out. www.jenwren2.blogspot.com. If you want to call her her number is 480-633-9918. Good luck and Happy New Year.