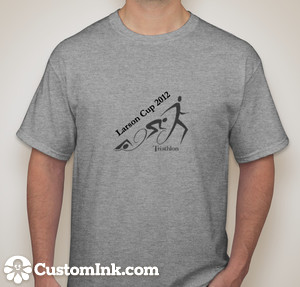 Yesterday was the annual Larson Cup Triathlon. I was so nervous! I had so many expectations of myself, and I was really hoping to impress my family with how much I had improved, so I was really hoping I wouldn't disappoint myself! It was such a fun event. My friend TR Brooks and his wife Ari and a couple of their friends joined us. It was really fun to catch up, and they thought it was such a great event.

It started as usual with the annual pasta pig out on Friday night. Its always so fun to see all of the family get together and get reacquainted. And of course its fun to eat pasta and bread with no guilt. :) We went to my parents house after to spend the night, it was a packed house with Dion, Summer and their 3 kids, plus me and my 4 friends, but it was fun. Ryan didn't come along this time, we knew the house was going to be crowded, and Kate isn't a great sleeper when we are away from home, and we didn't want her keeping everyone awake, so he stayed home with the kids. I missed them, but I have to admit 24 hours away from home did me some good. :)

I didn't sleep great, too many nerves! I woke up at 4am ready to just get the show on the road. Haha. Luckily I did fall asleep again for a little bit, but I got up at 6 and got ready, ate breakfast, and triple checked my triathlon bag to make sure I didn't forget anything important. We left for the tri at around 7:30. Once we were there my nerves ramped up a few more notches. I got my transition set up, then sat around and watched the kids races. I turned on my heart rate monitor a few times just to see if it was as high as I felt, and it was! A few times it got up in the 130's while I was just sitting there!

Finally it was time for the race to start. I got in the pool, I was sharing a lane with TR and hoping I could live up to the hype of how fast of a swimmer I was! We started off, I didn't feel fantastic, and TR quickly got in front of me, and I was NOT ok with that! :) I tried to just hold my pace and hoped he couldn't hold his, and that was the case, after a couple laps he lagged behind me a little and I was able to hold strong to the lead, I beat him out of the pool by 13 seconds, phew!

I ran out to the transition and got out pretty quick, although TR did beat me onto the bike course. My heart was still racing from the fast swim and the ride started with an immediate climb. That was NOT easy. I was sucking air trying to make it to the top of the climb, which was thankfully followed by about a 2 mile downhill where I could finally recover a little, then a slight climb/flat. Then we repeated that loop 2 more times, each time the big climb was very difficult for me, but I made up a lot of time by really pushing on the downhills. I made it a full loop before Anthony (our resident triathlon expert and winner by miles every year) passed me, I was pretty happy about that! There was one more smaller loop at the end, and that went well, so I finished strong on the bike. I transitioned quickly again and got out of the run. So far in the race I had yet to see another female individual participant. I was really excited knowing I was in the lead. Delos passed me at one point and told me I was a long way in the lead in the female race. That was pretty excited! Unfortunately I knew that the run is my weakest event, and that if I was going to lose my lead, it would be there. And sure enough, about a 1/2 mile into the run or so Emma (a 14-year-old) passed me. Bummer! :) The run was difficult. I was very tired, the first half of it was up hill, and I just plain suck at running, I had to walk a lot. I picked up my pace on the second half when it headed back down the hill and made up some time, but the race finished with another steeper climb, and then back down that hill, going up was brutal, I was able to run at a good pace down to the finish line for a finishing time of 1:34:36. I was very happy with that, especially considering how badly the run went. My goal for the race had been 1:35, so I was thrilled to have beaten that. My breakdown was something like 8:20 swim, 48 minute bike, 37 minute run (those are including transition times). 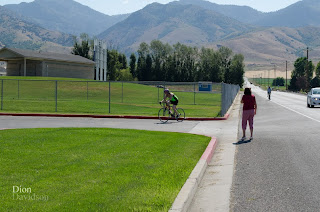 Finishing up the bike ride 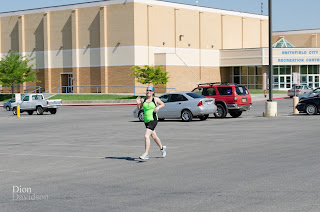 Off on the run!

I did a triathlon in May (Women of Steel) and finished in 1:33:57, but it had a shorted swim and a slightly shorter run, so I'm happy. :) I did not feel at my peak, I learned a few things I need to work on, running, obviously, learning how to hydrate properly during a race (I think I was severely dehydrated by the end), and working on being more positive as I race, I was a little hard on myself throughout, which I'm sure didn't help me. But overall, it was a great experience. My family was proud of how far i've come, and so was I. I'm gonna claim that belt next year!! Lots of people took pictures at the event, so I'll add some if anyone sends some to me. :) 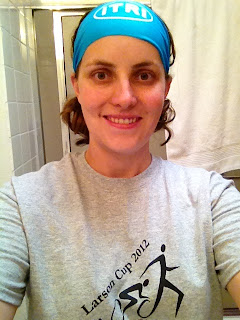 (Why do I always look creepy in pictures I take of myself?)

Oh, and I have to mention that TR ended up beating Anthony! A first in Larson Cup history. He finished in just over 1:10. I was highly impressed. 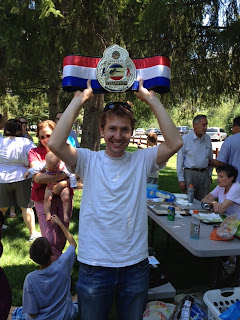 Wait. A Non-Larson took the belt? I'm not sure that's allowed.

girl I am super proud of you! you have no reason to be so hard on yourself. Nice job! running isn't easy anyway and I've never done it after swimming and biking so give yourself major points! good job!

I didn't get the belt, but was allowed a quick photo with it. I think being disqualified for beating Anthony was about the best possible award, sort of like the casino asking you to leave when you count cards at the blackjack table :)

Good Job! Just the fact that you did a triathalon is awesome!

I think it is really cool that your family does this every year. Congrats on the swim and the rest of it as well.